Slave to the machines....

Yesterday I spent a fabulous day with my nieces as we chose dresses for them to wear when they are my bridesmaids later this year - it was fun!!
However, this morning as I was driving them back to the airport to fly home I began to reflect on one or two things we did:

In the shop, we all took out our phones to take pictures of the different dresses
In the coffee shop where we retired to discuss our options for colours we used the phones to search the web for shoes
Once home again, we logged on in order to browse through several shop we knew, and to seek the sources we didn't - again seeking shoe options, and hair styles, hair accessories - it was, as it was intended to be a truly girly shopping fest - but from the comfort of home
This morning after breakfast we again logged on, so that we could check them in to their flights

And that is why I pondered as I drove them to the airport
It would not have been impossible to manage without the technology; but it did widen the scope for us
Every day the first thing I do after brewing coffee is turn on the computer, check my mail and log in to facebook to see what is going on in the world; if for some reason I am unable to do this I feel that there is something missing

Have I become a slave to the machines designed to make my life easier?
Has my dependance on instant electronic communication actually stopped me from engaging in real time, real life, real encouters?

I know that the world will not stop if I do not reply immediately; or if I do not know what is happening.
I suspect that if I spent more time away from my desk - the world would actually carry on regardless!

"Provide purse for yourselves that will not wear out, a treasure in heaven that will nto be exhausted, where no thief comes near and no moths destroy. For where your treasure is, there your heart will be"

My heart may need to spend less time at the desktop!
Posted by Julie at 14:29 No comments:

the things which motivate us 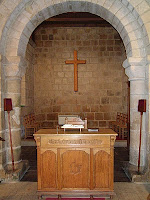 Yesterday, whilst sitting on a train or two for around five hours, I read a book that has been sitting, waiting to be tackled for several months - "The Reluctant Fundamentalist"
It has left me with some questions... regarding the things that motivate us, and indeed the things which provoke a response or supress our inclinations.
The book itself I disliked intently - the style was heavy and overly wordy (in my opinion!) I wasn't sure at the end what had happened nor indeed who the mysterious stranger was; it left me dissatisfied and uncomfortable.
The main character, Changez, had grown up, he had experienced unrequited love, he had had to face the contrast between the decadent West and the crumbling of his own Eastern world. And none of these are light subjects, unworthy of observation. If as a result of his experiences he had become a "terrorist" it would have been understandable in the context of the story - but he asserted that he had not; that his aim was to stop America's march over the world by means of education.
But to my mind, he never did answer his own questions; and all was so vague, so insubstantial that I was just irritated at the end.

So, now I try to find some parallels in MY world, that will inform my own reaction.
We observe the world; we witness various things that make us react - whether we acknowledge it or not.

Last night watching the news I observed the wife of a certain politician who has just begun a jail term say that he was in prison beacuse he had stood up for justice! Yet, he was sent to prison for perjury - the politics of the trial, the verdict, the whole ludicrous circus has done a disservice to real justice and has increasingly irked.

I observe the political party I have supported my entire adult life compromising and loosing its heart, all because of the lure of leadership - and instead of sticking to its values, it has sold out - no, it is not worth it!

I witness people in my parish, in my congregations, facing an uncertain future, their jobs are disappearing, and the future looks bleak. The recession is hard to bear for everyone.

I am saying goodbye; I am winding things up; I am preparing to move on, and to start over. So the "navel-gazing" is fairly deep just now! Maybe, it is just bad timing? Maybe if I had read this book at a different time it would have engendered a different reaction?

But, and for me this is the point: life is not predictable, and we all experience good and bad; positive and negative; to quote the Teacher "There is nothing new under the sun" it is not the experience that matters so much as what we do with it. We can allow the injustices of the world to knock us down and leave us flattened, or fire us up seeking vengeance; or we can remember that the Teacher observed all of the vagaries of the world and reached this conclusion:
"Now all has been heard; here is the conclusion of the matter:
Fear God, and keep his commandments,
for this is the whole duty of man.
For God will bring every deed into judgement,
including every hidden thing, whether it is good or evil"
(Ecclesiastes 12:13-14)

It is not for us to take revenge, or retaliation into our own hands; we follow God, we answer his call, we serve Him, and only Him. Revering God is our foundation it is the root of wisdom and our fulfillment.
Posted by Julie at 08:09 No comments:

getting ready to take leave...

The Church has many good things about it!!
But somtimes our structures seem utterly unweildy and convoluted...
Last Sunday, January 9th, more than 3 months discussions and prayerful reflection culminated in the invitation to preach as sole nominee - and the lovely people of Earlston voted overwhelmingly in favour of electing me to be their new minister

This for me is the end of one chapter and the start of another; it is also the fruit of almost a year of praying and discerning. Along the way I have met members of five different nominating committees; I have spoken to a dozen or so Interim Moderators; I have driven hundreds of miles to visit different areas; and I have prayed!!
Oh how I have prayed!

When we as ministers sense change is on the horizon; when we feel that the call is changing, that God is moving us out of the current situation and leading on to a new place, a new call - it needs testing... it is like no other job search. You can read a profile and on paper it is exactly what you think you are looking for; but then you arrive in a place and - nothing.
Another may seem on paper to be far away from what you are thinking about - but we work for God!! And God sends us to new adventures - within both the current place and further afield.
I never thought I'd leave the North East; it has been my home for almost 22 years; but here I am now planning to pack up my life and start afresh 200 miles south.

and how did I know?
because in serving God we are never alone, and when things are right everything is right
calm and peace descend when you are in the right place
and that is how I felt... such peace about the choice!

From the outside I suspect it may not seem so - and those I leave behind I will miss; I have made such good friends and been well supported in my time - but now is time to visit new pastures - never alone - for God is always with me!!
Posted by Julie at 07:11 No comments:

On death and dying 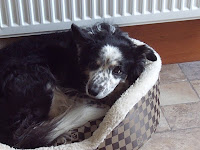 What a way to start the New Year - between Christmas and Hogmanay we seemed to be plagued by the passing of loved ones - not my own - but those of the parish
My first funeral of 2011 was Wednesday - first day back for the grave diggers - the family had been offered Hogmanay but didn't want to have that day coinciding with that anniversary... for me it was a personally sad day too - time to say goodbye to my companion of the past 13 years and more - Bracken, beloved, faithful friend and companion on many an early morning walk.
Bracken was a Border Collie - in her prime full of life and energy - no walk too long, nor indeed too frequent. Over the past few years she has had progressive spondilitis - the fusing together of the bones of her spinal column - by slow degrees getting slower and stiffer. She had drugs to ease her joints and her pain, but - ah! the drugs helped the disease but gradually caused her organs to begin to fail, and ate away at the lining of her guts. Not fair!
With a human you can explain, consult and encourage but how do you explain to your faithful friend? How do you ask her what she'd prefer?
Now lifting her into the car to go for walks...
watching her in the evenings chewing at her sore joints...
She still loved people; loved to be fussed and petted - but take away the stimulus of visitors and she'd simply curl up and sleep.

My dilemma: give her the release and let her go gently; or wait until the organ failure was so severe she went into a 'natural' collapse?
I loved her enough to be able to accept that it was not fair to keep her going to spare me.
So we sat and cuddled by the fire
the vet came to our home, and she slipped away in my arms... we pray that God grants us a peaceful end... and I wondered if I were that ill - would I want to choose to slip away peacefully in the arms of the one I loved?