sand between the toes 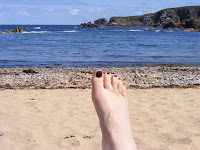 Holiday time; I had a brief discussion with the beloved this week about why I/we holiday in July when neither one of us has small children any more.
At first I really didn't have a reply - habit or conditioning both seemed to be fairly obvious answers.
But the more I thought about it the more I wondered; I may not have small children, and I may not be a teacher who has holidays imposed. However, I do have term-time rsponsibilitites - I'd have hated to go away in June for instance and missed the end of term assemblies and concerts at "my schools"; or the end of term service and party for "my" Sunday School; May was GA and although I wasn't there, staying in the office and watching the live streaming was both fascinating and informative; April - Easter; March - various Lent/ school activities; move the clock forward and you get to September - school starts up again; and so does the round of meetings; maybe November... yes November might not be too bad (so long as it doesn't hit Remembrance of course!) 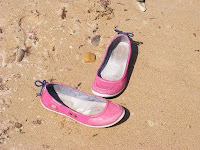 And then comes the crux of the argument - I am on holiday on the North East Coast of Scotland.... it is refrshing and stimulating in November - but not exactly warm and relaxing!! I'd not get the sand between my toes, nor the opportunity to walk barefoot on the beach... taking photos of the sea and the sunshine in November is not impossible, but you wouldn't do it in your T-shirt!!
Posted by Julie at 06:50 No comments:

who is without sin?

Like many others over the past few days I have looked on in horror and disgust at the depths that so called journalism has sunk to. Hacking into, and deleting voicemails and text messages - of the famous, and the infamous; and then more worryingly the innocents, the victims and the anonymous bystanders.
It seems to be a step way, way too far.
And yet, in all of this, I find I ask myself - who is really to blame?
I do not think I have ever read or looked at the News of the World; I have occasionally (some years ago now) read the Sun, as my "ex-Father-in-law" took it daily. But I do read the Times on a regular basis and that comes from the same stable.
We all are tempted by tabloid titilation - whether we admit it or not; because if no-one was, then the newspaper would not be 160 years old!!!
If so many of the advertisers had not withdrawn their support this morning would things have gone the same way? I doubt it...

But still I ask - have I contributed in any way to this?
I am sure that there is a vast section of the population who really do not care; do not know; do not want to know all of the stories of so called celebrities. But there are enough left who do - who soak it up, and who believe what they read... which is far more worrying.

This hunger for more gossip; for more sensationalisation; for more catastrophes; for the human interest angles seems to be insatiable. And as long as the demand is there, papers like the News of the World will continue to exist.

The blame is not solely with the journalists, the researchers, the snoops and the gossips... the weight of blame is shared between those who write and publish and those who buy and read.

Unless we each can honestly say we have never gossipped; we have never listened in on someone else's story; we have never read a single word that might stretch the truth - unless we can really claim a clean sheet - then who are we to cast the blame?

The writing is in the sand... let he who is without sin cast the first stone.
Posted by Julie at 22:05 No comments: