This has been an extraordinary week in Britain; I have watched with increasing horror at the devastation being wrought in our cities by a relatively small number of individuals.
That horror has been mirrored/ commented upon and generally magnified by the variety of comments posted by any number of my FaceBook Friends. Some I have heartily condoned - these have called for prayer, for love and for support. Others have disturbed me - for they contained great violence - not physical obviously - but verbal abuse: using swear words; calling for dire punishments; angry, angry words which I find I cannot support at all.
Which has led me to reflect further about how we apportion blame, and how we respond when we see injustice and conflict, especially when it is on our own doorstep.
I am not ashamed to be British; I am saddened that a few hundreds out of the 65 million inhabitants of our land have managed to tar everyone with the same brush:
it isn't every young person in England;
it isn't every minority group;
it is just a small section of the community who see no hope, no future and have grabbed an opportunity to jump on the bandwagon: there was an interview with a young man in Manchester on the news this morning, his attitude:

"well if I can get free stuff, I'm going to... I don't have a criminal record, what they going to do about it?!"

Like many I remember the 80s, and the 70s and the riots that happened then - there was unemployment, recession, fear and it led to great unrest and disturbance

This morning I once again turned to the wisdom writings and again I read:

"Whatever is has already been,
and what will be has been before
and God will call the past to account...
God will bring to judgement both the righteous and the wicked,
for there will be a time for every activity
a time for every deed"

We have seen it before; we will see it again
We will recover
We will prevail
We have seen hundreds of people resonding positively - getting organised to clear up, to work together - to bring hope to the hopeless... concentrate on that and remember the Wise Teacher! 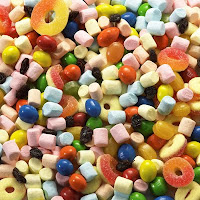 Gosh!! It's August already, and seems like an age since I last wrote; I think I got properly into holiday mode and relaxed into reading and walking and generally being on holiday - which is (of course) what holidays are for.
Today is Wednesday, so I've been home a week and back at work almost the week - today I finally finished unpacking and putting the suitcases away!!

I have been trying to keep hold of the refreshment of holiday relaxation by continuing to read for pleasure... and do a jigsaw... this one is called impossipuzzle - it's one of the double sided ones with a very difficult picture - sweeties!!! One side is all smarties, which really is impossibly difficult; the other side is just lots and lots of sweets: cola bottles; jelly beans; foamy marshmallows; shrimps; jelly babies; snakes; kisses; mini eggs... ah! such sweet treasures! It's difficult, but not impossible, and it got me thinking...

The sweets brought back memories of childhood, and the challenge of making them last; or gobbling them down fast; of eating so many you'd feel sick... sucking on a fruit pastille until all the sugar was gone.... or peeling back the layers of licorice allsorts... sweet memories.

Too much sugar is of course not a good thing; too much of any food group is not good for us - it will have an effect one way or another.
So I got to thinking of the things that we just can't have too much of: the love of friends and family; affirmation and encouragement; kindness and caring - not only can we not have too much - we can never give too much of it away...
take time for those sweet, sweet pleasures of telling someone they are special and that you love them...
Posted by Julie at 21:48 No comments: