Sermon 28th May: All Gods Children

All God’s Children
“If you belong to Christ, then you are Abraham’s offspring, heirs according to the promise” (Galatians 3:29)

What a week we have had!
Last Sunday as I left here, I set off to Edinburgh, to meet up with friends, to begin a week of observing the Assembly, and joining with many friends from all over the country to ponder what we were hearing and what that might mean for us.
The presentations have been wide reaching and careful; the opinions were wide ranging – it is clear that, on many subjects the church has a variety of views – however, and for me, this is the most hopeful sign of all, even though people disagree there was a spirit of harmony; a genuine desire to find ways to work together, with each other, even when we do not always agree.
There was hope, and there was encouragement.
The Balfour Declaration is an historic document, which, in 1917, indicated a desire to establish within Palestine a national home for Jewish people; it took another 30 years, and two world wars for this to come to fruition, but this was the beginning. Lord Balfour wrote in his original document that “nothing shall be done which may prejudice the civil and religious rights of existing non-Jewish communities in Palestine…”
The World Mission Council and the Church and Society Council together, presented a report which highlighted the  delicacy with which any celebrations might be held; and that in all things, to “use principles of justice, equality, dignity, equal access to resources and freedom of opportunity for all.”
I know that some of you will have heard Tom’s impassioned talk on his return from visiting Palestine/ Israel a couple of weeks ago; and how he had witnessed great inhumanity to the Palestinians in particular.
The debate that followed reflected all that Tom witnessed, but with dignity and inclusion; with a desire to allow all voices to be heard; all lives valued; all people honoured.
It was a privilege to witness. And that was only Monday!
Of course, Tuesday morning brought with it horror and tragedy. Manchester is the place I was born in; it is in the green belt surrounding Manchester that I grew up. To know that terror had struck in a place where young children – mostly girls and a few boys were enjoying music and performance; a place that should have been exempt from any hint of such atrocities struck to the core. The Assembly had a sombre atmosphere that day; and, as the news filtered through, we stopped and prayed for those injured, missing and dead, and those who were desperately searching for loved ones.

Divisions exist.
There is no denying it. all around us – there are those who will disagree; those who would deny rights to specific groups of society.
As we work through the letter to the Galatians, we reach a point where Paul is really chastising them for their foolish ways. Those who were born Jewish are continuing to find reasons not to include others. They see the Gentiles as different; not acceptable; they want them to conform to their rules, their laws; simply believing in Jesus is not enough for them – and so we hear this accusation: “You foolish Galatians!” (3:3)
It is a continuation of the same arguments we witnessed last week; from adhering to food laws; to keeping each law; to following a set of rules laid down by humans, not God, the Galatians seem determined to confound the Gentiles’ attempts to follow Jesus.
So, Paul brings it back to something really simple.
“As many of you as were baptized into Christ, have clothed yourselves with Christ. There is no longer Jew or Greek, there is no longer slave or free, there is no longer male and female; for all of you are one in Christ Jesus.” (3:27-28)

And really, we do not have to jump through hoops – we simply need to believe who Jesus was, and is. “In Christ (you) we are all children of God.” (v.26)
What a promise!!
What a joy!
What hope that brings!

Attending the General Assembly is a great privilege – we see the church at work; we see people of passion; people who under Jesus Christ are all one – all in God’s family. And in that family, there will be disagreement; there will be differing opinions; there will even be the odd falling out but, because of Jesus, even when we disagree, there is grace and dignity, there is hope and a genuine desire to continue together, even in those different outlooks, and that gives me hope for the future.

We are all in this together; we are all members of God’s family.

You may have noticed that this week I chose for the reading to come from the Church bible directly, and not via another translation.
Very often I find that the Good News Bible over simplifies the text, but this week, in Paul’s letter to the Galatians I was glad of the simplification, for Paul’s writing is often dense and multi-layered; and it explores concepts and definitions of faith which are difficult to grasp.

Paul is talking about justification – in the Good News translated as “put right with” – in one of the study guides I read it suggested replacing justification with “belonging to” for, in our 21st century context, the way we use justification is not quite the same as the theological meaning.

The early church was struggling; people were joining in their droves, and the disciples, the ones who had been with Jesus all the way through were trying very hard to accept these new people in, even though they were not Jewish by birth. This is manifested in the discussion here, where Paul is trying to explain why he and Peter have had what appears to be a very public row. Paul feels that Peter has used double standards – when he was first with the gentiles he had eaten with them and not suggested or imposed any Jewish food practises, but once other believers had arrived – who were Jewish by origin, he had pulled back because he was afraid it would cause a stir.
Those who were Jewish by origin were convinced (as you heard in the last two week’s sermons) that in order to really become followers of Jesus that all new converts must first become Jews before becoming Christian. Creating different qualifiers.
Putting obstacles in the way.
Adding conditions to faith.
Paul – who was the most learned scholar; who knew the law, and had indeed been an extremely vocal and violent persecutor of the followers of Jesus’ way; Paul knew better than most that this was not what God required of them.
Jesus had been sent by God to show people a simpler way. And Paul had been called by Jesus to bring that simpler way to those who were not Jewish by birth.
This new, simpler way, is no longer about sticking strictly to a set of Laws – even if those laws were God given.
No, the only way, the best way, to belong to God is by faith in God’s son Jesus.

Paul is talking about the question of who belongs in the faith community, and who doesn’t. In our faith community, how do people know they belong?  What do we do, how do we act, what can we say to let people know they belong in our faith community?
What do we do, or say, that makes them feel that they don’t – sometimes, just by being who we are, doing the things we know, using the language of church we exclude new people who have no idea what is happening all around them.
Paul’s assertion, is that faith in Jesus is enough. In fact, that is exactly what Jesus said: no one comes to the Father except through me. This sounds good, doesn’t it?

But what about those who don’t help the church?
Don’t support our buildings financially?
Those who come along and use the church if it suits them, but not if it doesn’t?
What about those who believe in Jesus, but worship God in their own way, away from church?
Are they good enough?
Are we good enough?
Do we really believe that faith in Jesus is enough?  Or do we feel like we need to add just a little bit more to be sure?
It certainly sounds good, reassuring even, but maybe we need to work long hours at the church just to be sure, maybe we need to be seen, maybe we need to lead/ join a group… the add-ons could be endless.
So, how do we live with this deep freedom Paul describes here?
For years – and I mean years, from bible study as a young mum in a wonderfully supportive group; to exploring my sense of call to ministry, to studying the bible in depth at university, to reading and studying for myself, and for preaching, in all of these times over probably thirty years, I have struggled with Paul’s letters!!
Firstly – they are densely packed and often difficult to understand; secondly they often leave me feeling inadequate, or with more questions than answers.
And thirdly, they often leave me feeling that what they are telling us is something that is far too difficult to really take on.
Today of course, we have the exact opposite!
Paul has, through complicated and heavily layered argument, brought it down to something that is actually very simple: we are made right with God through faith in Jesus.
That’s it.
Nothing added.
No great tasks to perform.
No huge commitments to make.
Simply trust Jesus. Believe he is God’s Son.
Believe he died for us, for our sins to be forgiven. Believe that through Jesus our lives are restored to God.
Paul is stating that if we have our focus on Jesus right and we follow that way, then we do not need to think about the law or spend time on the outward showings of keeping the law; in other words, trust in God’s grace on this rather than our own particular good deeds or how we respond to the law.
Trust God’s grace
Trust God’s love
Live in and through that grace and with God’s love in our hearts and everything else will fall into place.
I do the things I do; live the way I live, not because I think I must do it; but because the way I live out God’s love is to share it in whatever way I can.
And, I know that all around me, in this our church family, I see the same – God’s faithful people, living and loving, and showing others God’s love in action.
Trust God.
Trust Jesus
And live in God’s love – that’s something we can all live by. 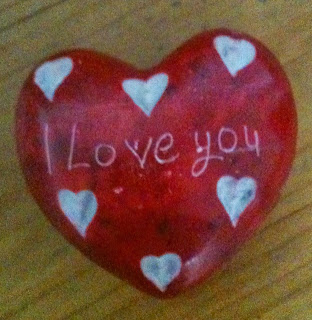