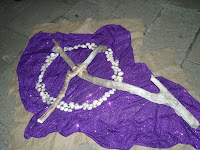 It is early; well - it is actually not that early for I have been up for some time now! However, for many this hour on a Sunday will be early.

I love the early hours of the day - the quiet before the rest of the world wakes. It is a time for reflecting, a time for me & God to catch up.

This morning as I woke I had a wee moment of confusion- what day is it?!
It didn't really feel like it could be Sunday already!
Such a busy week it has been; not that I actually went anywhere - far from it, mostly I spent hours in my study glued to the computer.
And why?
Because I was transfixed by the General Assembly. It was a good week for the church: the Assembly was everything it should have been: real debates; real respsones; real people sharing thier all with each other.
On Monday the media were there in force; searching for scandal, for dissent, for something sensational - an I think they thought they had it too! But for me, the whole week was sensational - our peers truly entered into the week - challenging, reacting, listening to one another, and making decisions that did not necessarily go as some had hoped or predicted.
This is good - for our church is Presbyterian; our decisions are shared, and reflect the will of all - not just the committees and councils that represent our membership. And certainly not just the will of a leader, or single small group. This is something to be celebrated, and applauded.
I was exhausted just being a remote observer - I wonder how my peers are feeling this morning as they return to their parishes - blessings on each of them, and us as we move forward embracing the decisions and putting all these things into action.
Posted by Julie at 08:43 1 comment:

A Day of Unity 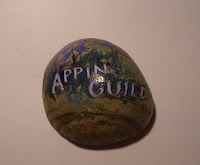 Yesterday- Sunday May 22nd - what a day!
Worship at home followed by joining with members from a neighbouring church to bus up to the capital for the church's big gathering: Roll Away the Stone - and what an event it was!
Friends old & new
Worship from home and away
Going from the sanctuary of St Cuthbert's and the Gaelic Choir out to the Ross Stand for the Massed African Choir - each element touching me in different ways
bumping into various members of my congregation - all somehow taken up by the spirit of the occasion
Was it worth the effort? Without a doubt!!
Rather than a formal afternoon at Holyrood for invited guests only the church truly threw down its barriers/ walls and opened its arms wide - welcome to one and all this is our church - this is our God!
Up and down the park people were interviewed sharing thier faith; sharing thier love; sharing our Lord with all who could hear
I left a stone marked "Earlston Parish Church" I collected a stone marked "Appin Guild" - they had clearly been better prepared that me!
The day was a wonderful witness - and a restorative for the soul - I pray it is the first of many, and that the sense of unity and togetherness will continue through the days of the Assembly
Posted by Julie at 09:58 No comments: 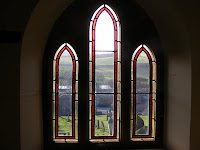 Having just returned from a conference where I was privileged to be chaplain to my peers I am tired but still energised (a strange feeling indeed)
during our three days together, as well as reflecting on sharing, mentoring, and time we spent much time talking about our own experiences.
Ministers hold a unique position in the community they serve: we can enter most homes with ease; we are invited to share in the most profound of experiences: life and death and everything between.
And so often, these encounters are reciprocal. We learn of bravery and stoicism; of grace and love; of faith and the spirit.
As ministers we know this and when ministers gather we inevitably turn to sharing our experiences: the hilarity and the tragedy
and in that sharing we recognise godliness - God in Action - what a blessing new friends and thier stories are!
Posted by Julie at 23:18 1 comment:

Trying to get motivated after a week off seems inordinately hard this week!
Yet, this morning I have given myself a little shake: having looked at the material for the Christian Aid Week Service I am planning, I realise I am so lucky.
My education was a given; my freedom, to work, to play, to rest, to have the security of a warm home and safe sleep, are all there without me ever having to fight for the right.
And here I am, bemoaning my lack of motivation because my head is still on holiday!

For laughter where there were tears;
For resilient communities more able to withstand disasters;
For voices speaking out against injustice
which were previoulsy silenced;
For feasting where there was hunger;
For all the ways that Christian Aid is helping to transform communities
enabling our sisters and brothers to have fuller lives,
Thanks be to God
We are part of that,
Thanks be to God!